Shanghai offers a wide selection list on eating, you could easily find restaurants in various of cuisines: Chinese local cuisines, European, American, Latin, Mediterranean, etc., and some of the restaurants had been certificated with the international food awards.

As a super metropolis city in China, the fusions of cultures and customs in Shanghai exist in many aspects, dining is the significant one.

China covers a land area comparable to that of Western and Southern Europe, and within its boundaries lie nearly every known land form: snow-capped alpine mountains, fertile river valleys, bamboo forests, dune-strewn deserts, even tropical rainforests. The country also boasts 56 unique ethnic groups, each with its own unique cultures, customs, and foodways. Needless to say, all of this makes for some of the world's most diverse cuisine within China's borders.

Space doesn't permit an explanation of it all. Thankfully, the Chinese have a convenient shorthand already in place. Traditionally, they recognize Four Great Traditions, which roughly correspond to the cardinal directions on a compass.

Highlights from the northern land

In the north, there is Shandong or Dongbei cuisine, best known for its variety of seafood and cooking techniques like braising. Rice cultivation was minimal in these parts over the traditional age, so they get most of their carbs from staples like oats and wheat, which comes in the form of steamed buns or noodles. Shanghai offers plenty of restaurants specializing in the cuisine of China's north. Try Dongbei Ren (东北人)  or Four Seasons Dumpling King (四季饺子王)  for a taste of Dongbei Cai 东北菜 (Northeast flavors). Speaking of the northern flavors, Peking foods is a must to get covered, as some of them are considered as the representatives of the traditional Chinese foods, such as Roast Duck 烤鸭, and Motton Hotpot 涮羊肉. For the prominent Peking roast duck dealers, look no further than Xindalu (新大陆) in Hyatt on the Bund. Famed Beijing roast duck restaurant Da Dong (大董) also has several branches in Shanghai, two of which have been awarded Michelin stars (iapm and Park Place). For budget options, recently opened chain diner Wan Su Cui 万酥脆 offers great convenience to taste quality roast duck at incredibly friendly prices, due to its business model is more based on delivery, making an order by phone App (eleme 饿了么, or Meituan 美团外卖) and getting it delivered straight to your appointed place, savor hunting can't be much easier!

Highlights from the southern land

In the south, it is Cantonese cuisine (Guangdong Cai 广东菜) playing a tremendous role in representing the finest of Chinese cuisine.  Its decent ingredients, elaborate cooking process, and exquisite dish presentation are brought together into peerless perfection that even has its reputation globally recognized. This region boasts a subtropical climate with a long growing season and a wide variety of flora and fauna, making it easily the most diverse of the Four Great Cuisines. The Cantonese believe that as long as you've got fresh ingredients, the food will speak for itself. Vegetables are often given a quick stir-fry with little more than garlic and ginger for seasoning. Meat and fish are often seasoned the same way and cooked in a steamer. Rice replaces steamed buns as the preferred staple. It's also the Cantonese who gave the world dim sum, those small, snack-sized portions of dumplings, spare ribs, rice rolls, etc. that are a Sunday afternoon institution the world over. Tang Palace (唐宫), Dian Du De 点都德 are two tried and true options for taking quality Cantonese foods at reasonable prices, their roast pigeons, and a wide selection of dim sum are renowned nationwide. 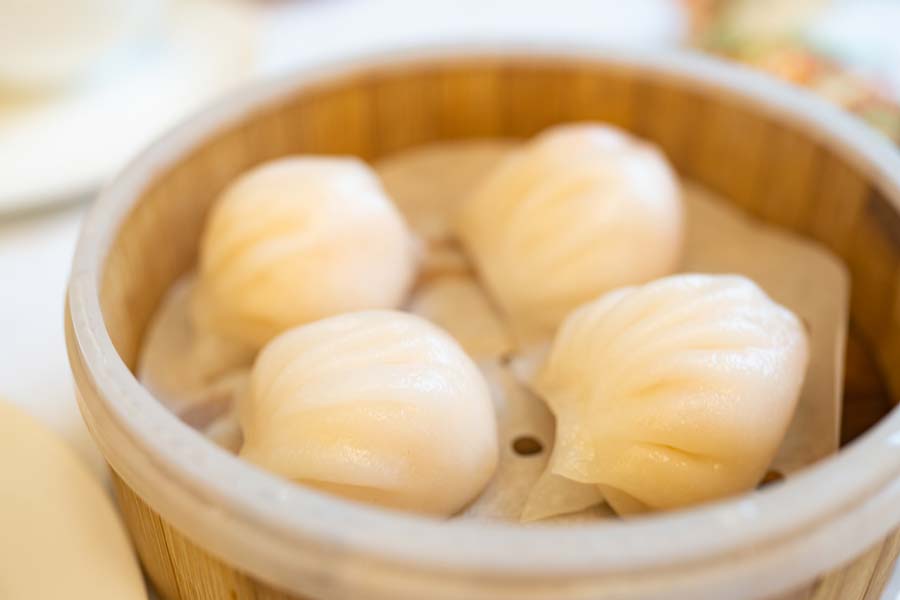 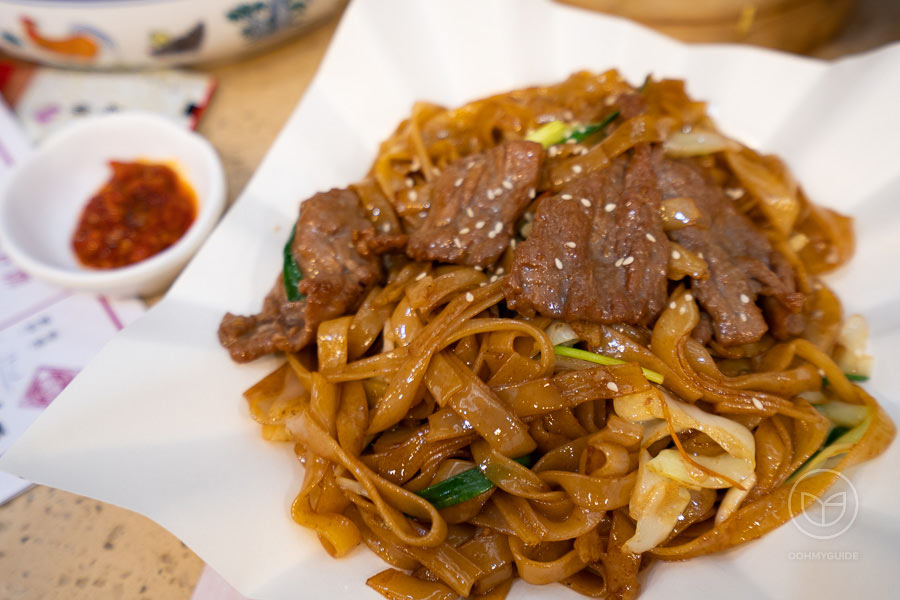 For a worthy splurge, give a shot at Imperial Treasure (御宝轩). This Singaporean import's exquisite renditions of Cantonese classics have earned it two Michelin stars two years running.

Highlights from the western region

To the west, things start to get spicy with Sichuan cuisine. The Sichuanese have a penchant for chili peppers. They're an essential ingredient to the region's most renowned dishes like gongbao jiding 宫保鸡丁(a.k.a. kungpao chicken) or mapo tofu 麻婆豆腐. But that's hardly what makes the food of Sichuan unique. That honor goes to a lesser-known member of the citrus family that the Chinese call huajiao 花椒, or "flower pepper." Also known as "Sichuan peppercorn," this ingredient gives much of the region's cuisine a unique tongue-numbing quality that balances out the heat of the chilies. It's a taste sensation that the Chinese refer to as ma la 麻辣, or "numbing spice." The Sichuanese are also known for their pickled and preserved vegetables as well as their smoked meats and sausages. Editor's picks: Sichuan Citizen (龙门阵茶屋), Yuxin Chuan Cai (渝信川菜) and Benlai Jingpin Chuancai (本来精品川菜). 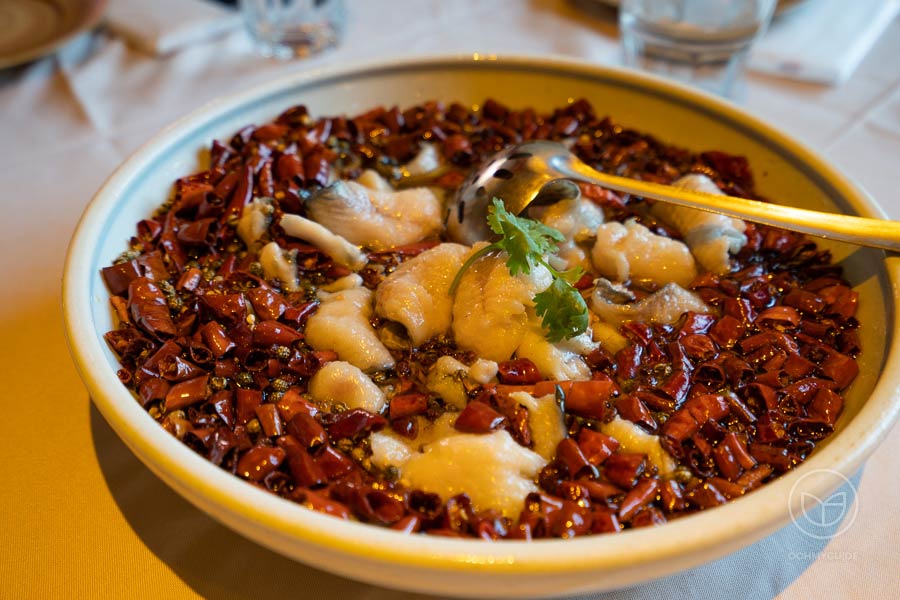 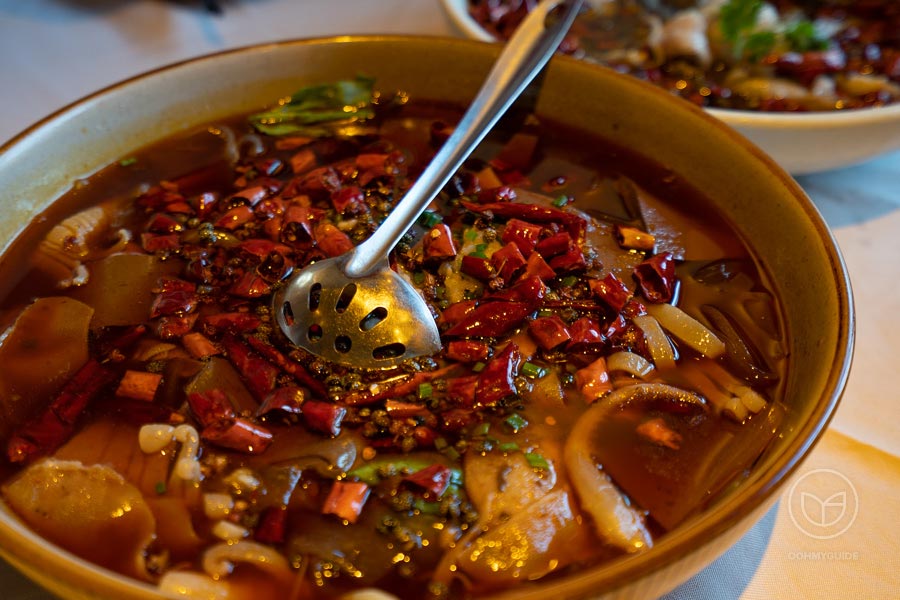 Hunan Province doesn't enjoy the same exalted status as Sichuan in the pantheon of Chinese cuisine, but it warrants a mention nonetheless. In Hunan, they double down on the heat. They're known for using heaping quantities of fresh red chilies. It's a cooking style known as "gan la," or "dry spicy." Paired with a penchant for using smoked and preserved meat, this cuisine is bold and brash. Some signature dishes to try include cumin pork ribs (孜然排骨), steamed fish head with red and green chilis (双椒鱼头), and ground pork with pickled long beans (酸豆角肉末). For proper Hunan cuisine, try Di Shui Dong (滴水洞) or Hunan Country Cuisine (湖南乡村风味馆). 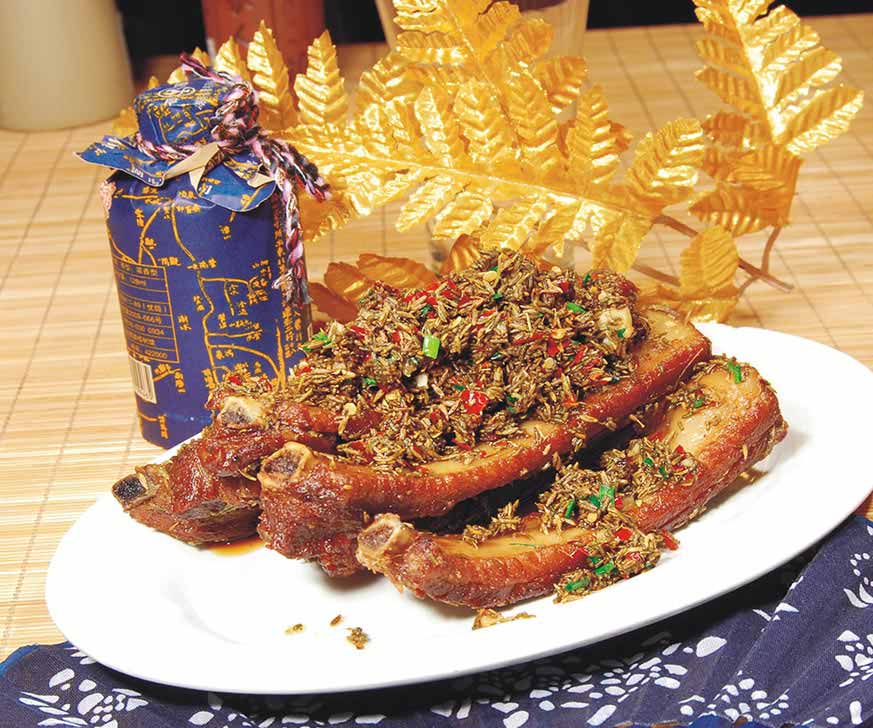 It's worth taking yet a few more detours from the Four Great Cuisines. Due south of Sichuan likes the Yunnan Province. 25 of China's 56 recognized ethnic groups reside here. Landforms range from alpine mountains to tropical rain forests. Culinary traditions vary from valley to valley. This means a staggering diversity of ingredients from fresh flowers and herbs to wild mushrooms. For a taste, try Lotus Eatery or Lost Heaven 花马天堂. Then there is China's far northwestern province of Xinjiang. This Silk Road outpost is home to China's Uyghur's. They're a Turkic-speaking speaking people who practice Islam. Their cuisine is a crossroads of Chinese and Central Asia exemplified in their cumin-scented mutton kebabs (羊肉串), roasted lamb dumplings (烤包子) , rice pilaf, and da pan ji (大盘鸡), a thick, aromatic stew of chicken vegetables and potatoes cooked in a pressure cooker.  For a taste, try Xibo (锡伯) or Yershari (耶里夏丽). 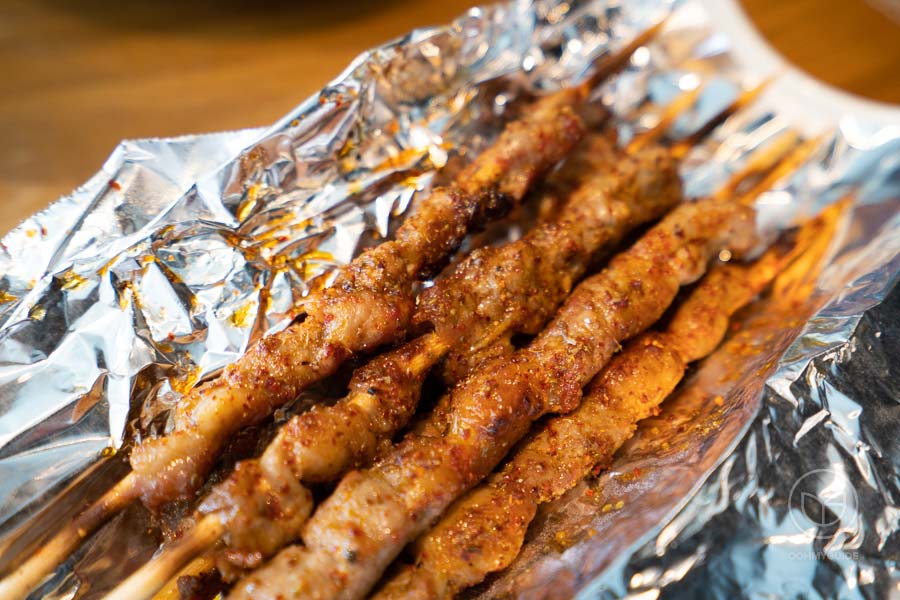 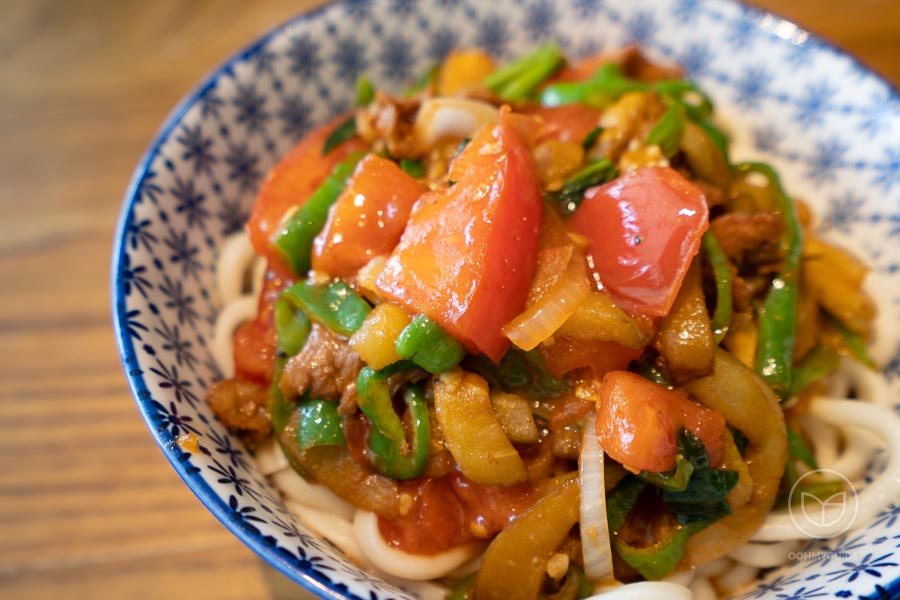 Highlights from the eastern region

Finally, there is Jiangsu Province in the east. Known as the "Land of Fish and Rice," this province was once a cultural capital of China. Cities like Yangzhou benefitted greatly from the commerce of the Grand Canal that joined the Yangtze with the Yellow River to the north. The wealthy merchant class that arose developed a taste for fresh, highly seasonal cuisine with an emphasis on exhaustive preparations like intricate cutting techniques. The diversity of ingredients is comparable to that of Cantonese food, but with greater emphasis on freshwater fish and crustaceans. Cooking techniques include quick-frying, red braising, stewing, as well as pickling and preserving. Editor's picks: Jardin de Jade (苏浙汇) and the one-Michelin-starred Yong Yi Ting in the Mandarin Oriental Hotel.

But there is also vibrant local food culture in Shanghai, too. It may lack some of the pedigree of the "Big Four." In fact, some might even argue that it's really just an amalgam of cuisines from the surrounding areas, like Zhejiang and Jiangsu Provinces. Nevertheless, much of the local fare in Shanghai is quite excellent.

For starters, no visit to Shanghai is complete without a taste of its two signature dumplings: steamed xiaolong bao (小笼包) and pan-fried shengjian bao 生煎包. Red-braised pork, or hongshao rou 红烧肉 is also a must. It's almost mandatory that at least one of these are served in any given Shanghainese restaurant. Being a port city, seafood also plays important role in the diet, particularly in the colder months when Shanghai residents dine on hairy crab, which is prized for its sweet meat and rich, fatty roe. Check out ye Shanghai(夜上海), 1221, or RIVIERA 松鹤楼, Hai Jin Zi (海金滋), and Jesse (吉士)for these unique delicacies. If you're on a bigger budget, try Fu 1039(福1039) or nearby Fu 1088 (福1088). 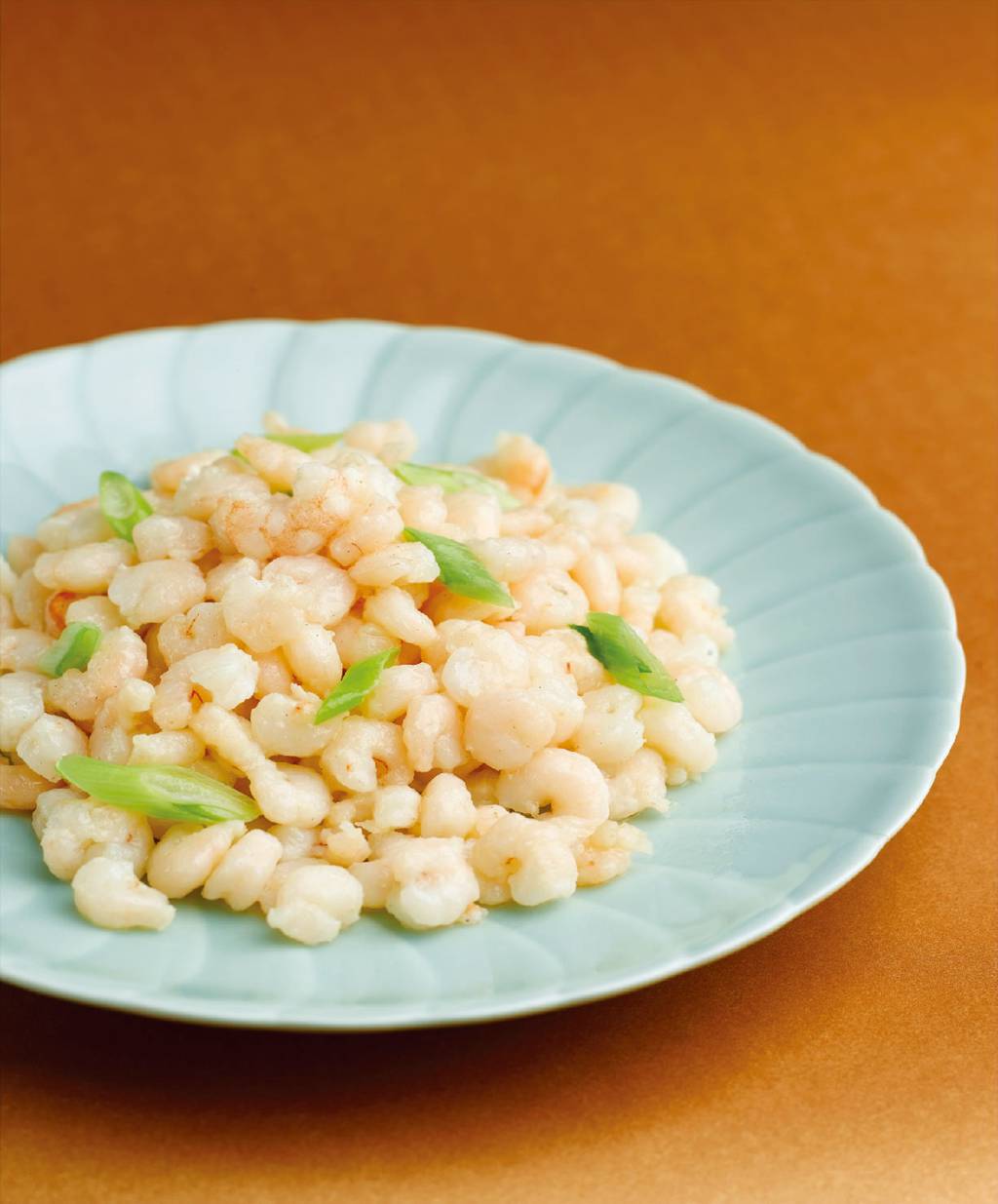 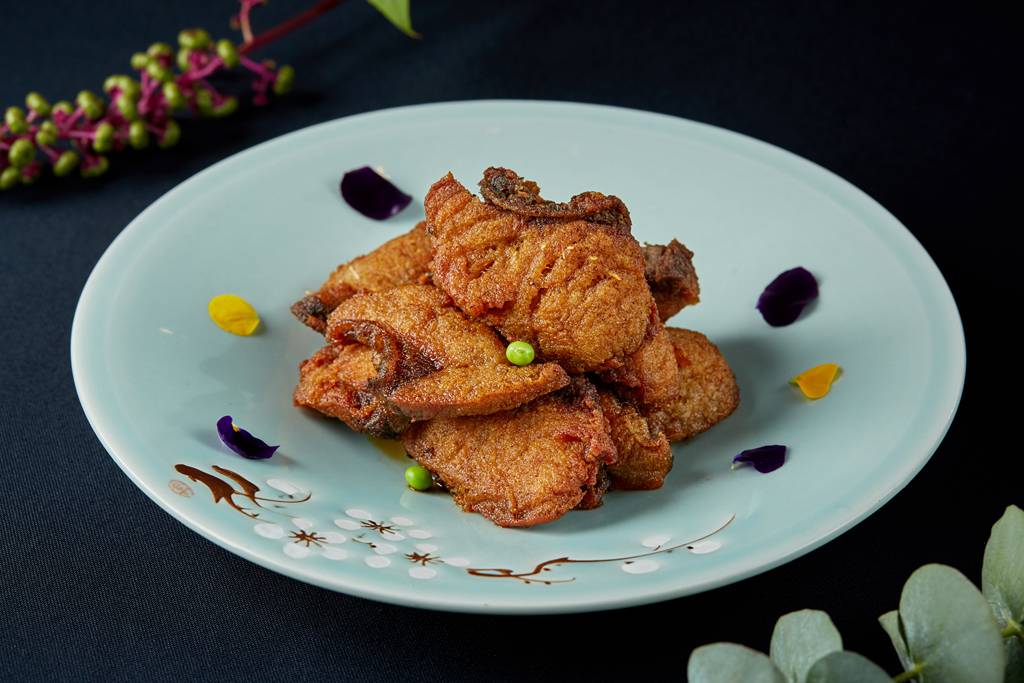 Adding to this staggering diversity is a growing number of world-class restaurants opened by international celebrity chefs. Culinary luminary Jean-Georges Vongerichten, for instance, has been a fixture in the city since 2004, when he opened his eponymous restaurant at Three on the Bund. It remains a hot dining destination and was awarded its first star in Michelin's 2018 guide. Also not to be missed is Mercato Jean-George's first-ever Italian concept. Jean-George's success in Shanghai has opened the floodgates for chefs of note. Former Gordon Ramsay acolyte Jason Atherton arrived in 2010 to open Table No. 1 in the Waterhouse Hotel and then in 2013 opened the eclectic, modern tapas bar The Commune Social. Famed French chef Nicolas le Bec shuttered two critically acclaimed restaurants in Lyon, France to open Villa le Bec on a gorgeous tree-lined street in Shanghai's Former French Concession. 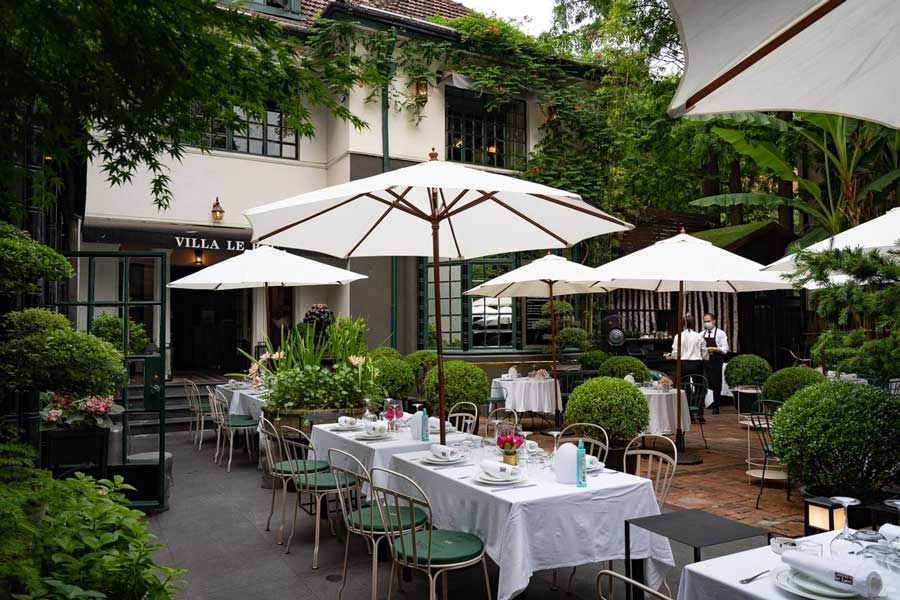 Avant-garde Hong Kong Chef Alvin Leung (of Bo Innovation fame) has also thrown his hat into the ring with his high-concept one-Michelin-starred Chinese restaurant Bo Shanghai and his quirky up-market Hong Kong diner Daimon Bistro. Joël Robuchon, the chef with the most Michelin stars to his name, had expanded his reach to Shanghai with L'Atelier de Joël Robuchon in Bund 18. Likewise, other longtime legends like Marc Meneau and Pierre Gagnaire are working in concert with local luxury hotels to open MARC and Le Comptoir de Pierre Gagnaire, respectively. 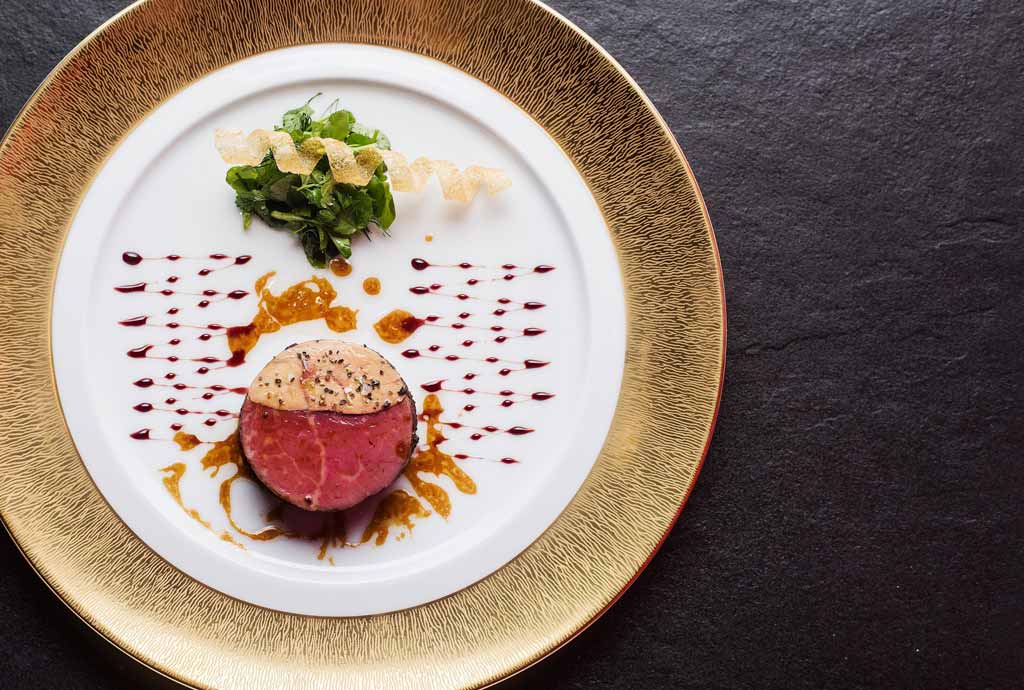 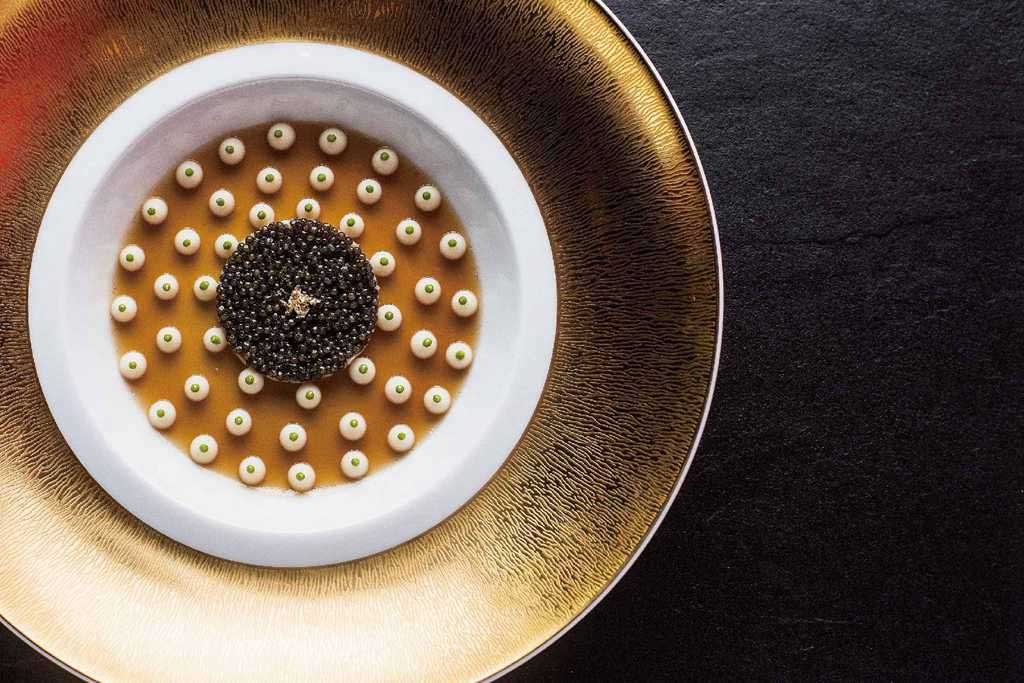 And while some chefs have converged upon Shanghai with reputations that precede them, others have built their names in Shanghai. Chef and restaurateur Willy Trullas Moreno, for instance, is synonymous with creative Spanish cuisine in Shanghai. All three of his restaurants—el Willy (closed), el Efante (closed), and Tomatito—are not to be missed. French chef Paul Pairet has also helped put Shanghai on the map for international cuisine. His three-Michelin-starred ultraviolet combines creative cuisine with audio, visual and ambient olfactory elements for an unforgettable immersive dining experience. With only ten seats, however, a reservation here can be hard to come by. Fortunately, he has the other restaurant that is just as good but more affordable and easier to get a table at: Mr & Mrs Bund in Bund 18.

And if any of that is too rich for your blood, Shanghai has seen an influx of American chain restaurants as well as a proliferation of several homegrown chains. Fast food chains like McDonald's and KFC are ubiquitous. Taco Bell opened up two branches in both Pudong and Puxi as well. For more of a sit-down experience, you can find branches of Hooters (all closed). Or to try something born and bred in Shanghai look to Blue Frog 蓝蛙 and Element Fresh 新元素.