There was a time in Shanghai when if you wanted a proper drink, your choices were limited to the bar in your hotel or a lounge down the street. But today, Shanghai's nightlife scene is thriving and full of options. Clubs, lounges, bars that specialized in beers, wines, cocktails could be easily found in the downtown.

Clubs like M1NT and Linx are regular tour stops for DJ Magazine Top 100-listers. Swank, champagne-soaked Bund lounges like Roosevelt Sky Bar and Bar Rouge are popular haunts for Shanghai's glitterati, while ASL and Monkey Champagne (closed) cater to the hip hop crowd. LeBaron features a diverse mix of anything from disco and house to soul and even live music performances from renowned DJs and producers. There are also proud pockets of counter-culture to be found in clubs like Arkham (closed), ALL and Reel to Reel (closed).

In recent years, Shanghai clubbing culture has grown even more sophisticated and mature. Nowadays, it takes more than velvet ropes and bottles of Dom to lure punters in, and venues like The Nest on East Beijing Road have taken notice. Here you can start the evening with a gourmet meal and continue with some expertly crafted cocktails. Music is a departure from the typical incessant thump you expect in most clubs, and the volume is loud enough to fill the room, yet you can still carry on a conversation. The Nest's sister gastro-lounge, The Cannery on Yuyuan Road, offers something similar with more focus on food, cocktails, and craft beers, and when the weather is nice, there is patio seating, too.

Craft cocktail culture is also huge in Shanghai. Bar Constellation is one of the founding venues of the movement. Over the years it has grown from a quiet, anonymous Japanese-style lounge on Xinle Road to six locations around town. The phenomenon has grown into countless subgenres, too. There are American-style saloons Senator Saloon and Union Trading Company. There are hidden speakeasies, around town, too, like Speak Low, Second Moment, The Bunker, and Barbershop. You can even take in a magic show with your drink at Blackstone Magic Bar (closed).

Craft beer has taken a little longer to catch hold in Shanghai, but its day has finally come. Brewpubs like Boxing Cat and Kaiba Belgian beer bar (closed) have been going strong since 2008, followed shortly thereafter by Shanghai Brewery and Boxing Cat's sister gastro-lounge Liquid Laundry. Beer giant AB-InBev is betting on a growth market in Shanghai as well, having opened up its first-ever Goose Island brewpub in Mainland China. Filling in the gaps is a proliferation of small retail bottle shops that double as bars, like The Beer Lady, Beer Plus, and Brew Bear. In places like these, you can grab a few bottles to go, or there is seating, so you crack a few open with some friends and enjoy them in the store.

Wine enthusiasts are also spoiled for choice in Shanghai. Dr. Wine (closed) has perfect prescription of red or whites by the bottle or glass in a warm, friendly atmosphere. Kartel on Xiangyang Road boasts chic modern décor and vast rooftop terrace with 360-degree views. 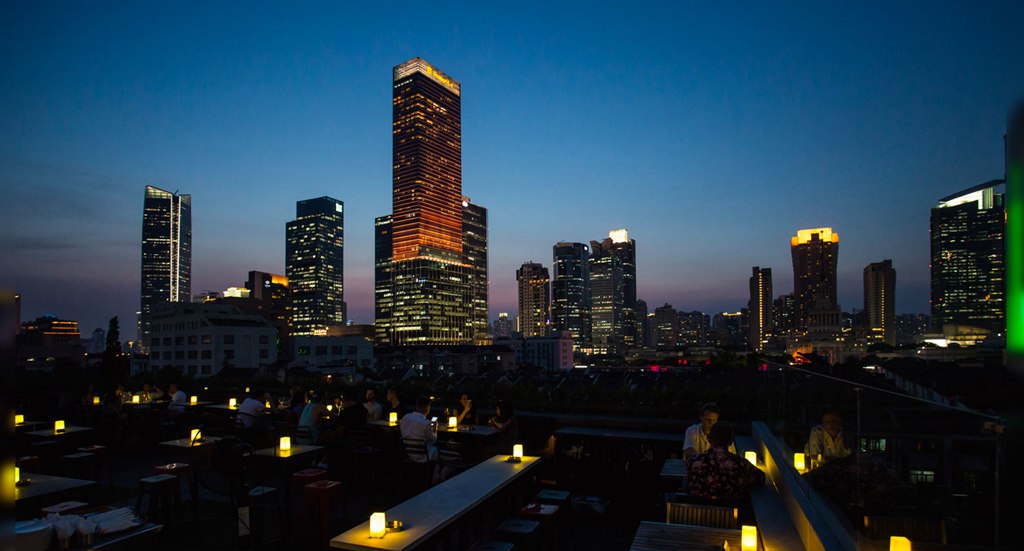 The rooftop terrace at Kartel

Le Bordelais (closed) specializes in wines of the famed region of Bordeaux, at shockingly reasonable prices. Le Vin is a small slice Paris on Changle Road, where you can soak in the convivial vibes. Book ahead; it fills up fast.

Shanghai gets about six weeks total of decent weather. So when it's not hot and humid or cold and damp, a popular pastime is kicking back with a few friends in a bar with a garden villa. Sasha's (closed) is a time-honored destination, serving a vast selection of imported craft beers, expertly mixed cocktails and comfort food in a serene garden setting. Once the sun goes down, pay a visit to neighboring nightclub Zapata's (closed) for a raucous, tequila-soaked good time, too. Cotton's Bar 棉花酒吧 is another Shanghai favorite and has two locations. Both are perfect for whiling away the hours in the shade of the plane trees. 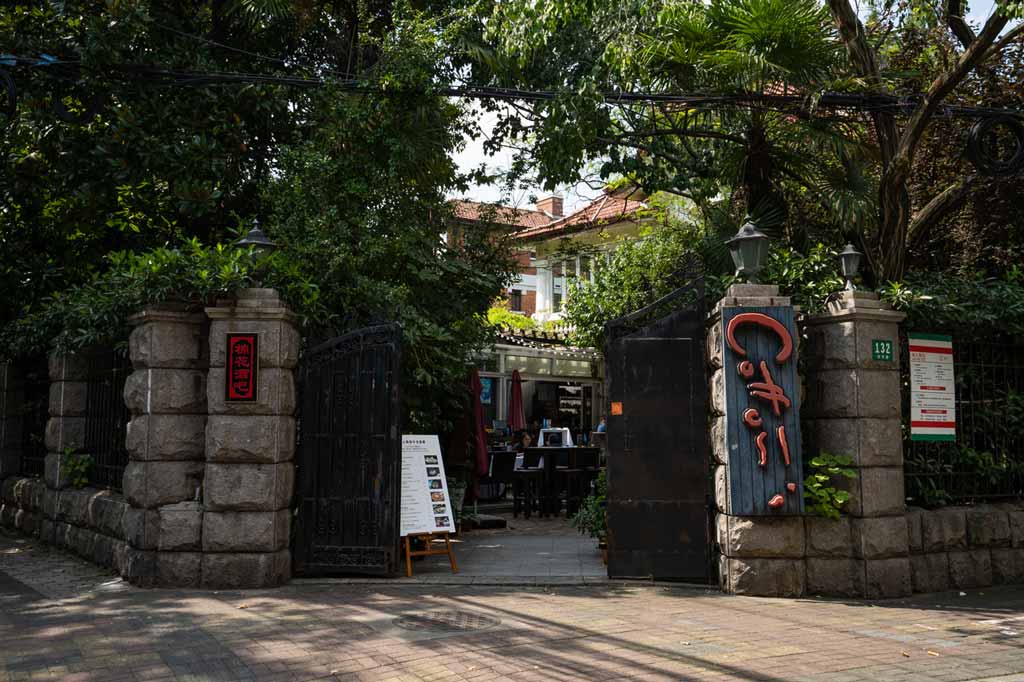 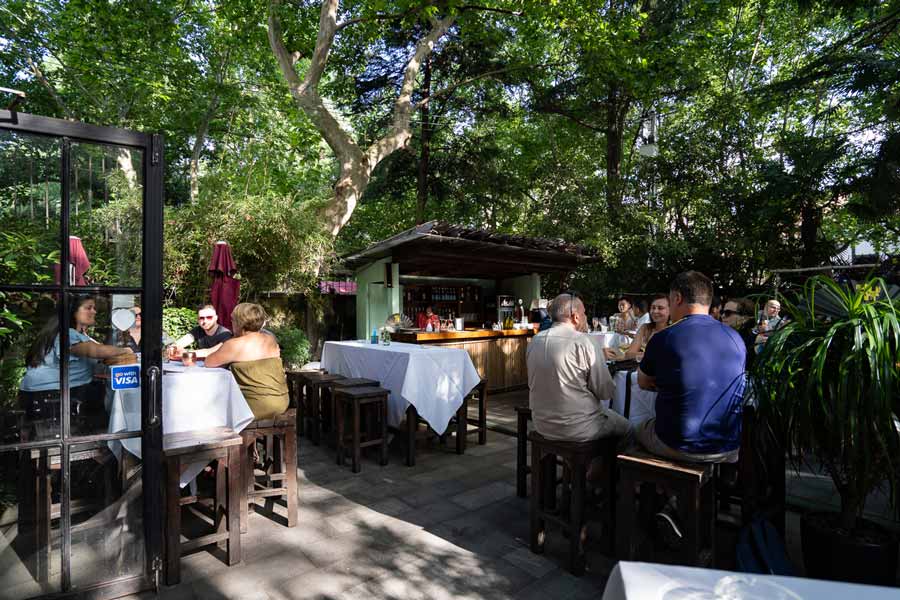 Since its days as a treaty port, Shanghai has been a hot spot for jazz music. Today, JZ Club still carries the torch. This live music venue hosts live performances by both local and international artists. Wooden Box, Heyday, and House of Blues and Jazz are also great for live jazz. Shake, Heyday's sister bar features nightly live performances of soul and R & B, while nearby Candor (closed) showcases burlesque and cabaret revues paired with elaborate cocktails.

Yuyintang is Shanghai's go-to spot for underground rock, while larger venue like Mao Livehouse, hosts international acts that aren't yet big enough to fill an arena.

Nowadays, the term "dive" has become more of a theme for a bar than an actual description. Yet some places still live up to the name. C's is the most legendary. Hidden in the basement of an anonymous building on Dingxi Road, every inch of the place is covered in years and years' worth of graffiti. Drinks are reasonably priced (by Shanghai standards, at least), it's open late and draws an eclectic crowd. My Place Ruin Bar in Jing'an District also proudly lives up to its reputation as a dive bar.

For many locals in Shanghai, karaoke (or KTV as it's more commonly know) is king when it comes to nightlife. Customers can rent a private room equipped with a karaoke machine and an exhaustive, digitally stored catalog of songs. Waiters will bring you everything you need—booze, snacks, etc.—while you belt out your favorite songs. If you can overcome your stage fright (which is becomes easier and easier after a few whiskeys on the rocks), KTV can make for an epic party. Chun-K 纯K is the most popular chain brand with 4 locations among Shanghai's foreign community. Haoledi 好乐迪, one of the initial karaoke entertainment brands established in China, having the most branches across the city, can be the solid options as well.

Things need to be watched out

Finally, a word on scams. By and large, Shanghai is a city of decent, law-abiding citizens. But there are outliers who are all too happy to help you part with your money in devious ways, and the more impaired you are by alcohol, the easier this is for them to do. Here are few tips.

1. Avoid so-called "talking bars." These places aren't marked as such, but they're easy to identify once you're inside. They're usually empty, save for other unwitting lonely older men. The young, attractive all-female staff will be all too eager to chat with you, and ask you to buy them shots. You get a real drink, they get a decoy. They keep their edge as you get progressively drunker. They laugh at your bad jokes, flirt with you, and keep ordering drinks. Then when it's time to settle up, not only are you footing the bill for her drinks, you're charged for her company. If you argue with the management, there is usually a large, terrifying bouncer on hand who is all too ready to "arbitrate" the dispute. You can probably guess whose side he'll take. If you find yourself in a bar where the women seem unduly aggressive in pursuing you, you can bet it's not because of your good looks, your charm, or that new cologne you're wearing. You're a mark, and they'll shake you down for however much money they can.

2. In certain neighborhoods, you may find yourself being offered massage services. It should go without saying that these are not legitimate independent entrepreneurs. Most of these women are shills for "massage parlors" that operate on the fringe of legality. If you take them up on their services, you will likely pay an exorbitant rate and get offered other "off-menu" services. Like the talking bars, most of these establishments staff a large, scary man, who, again, is available to "settle" any disputes you may have about rates and services rendered. The ones who aren't working for "massage parlors" are straight-up prostitutes. Prostitution is illegal in China, and the inherent health risks of this activity go without saying.

3. Avoid getting in bar fights, especially with locals. Don't start fights. If you get into a fight with a local and the authorities get involved, it doesn't matter who started it. You will lose. If you're in a bar and you see the potential for a conflict to escalate, just leave. Believe us, the price of temporarily wounded pride is cheap compared to paying for somebody's hospital bills, spending a night in the police station (or worse, jail), or having your visa revoked.

Search for more venues for nightlife in Shanghai